Coming Up: Give-A-Jam to Prevent Homelessness at The Clifton Center, benefiting the Coalition for the Homeless.

The Give-A-Jam benefits the  Coalition for the Homeless.  This year's event focuses on Ending Veteran Homelessness.


In its first three years, the Give-A-Jam to End Homelessness has raised more than $43,000 in support of the Coalition for the Homeless’ efforts to eliminate homelessness in our community. On Thursday, December 18, 2014 we’ll do it again with the goal of raising $15,000 more, and you can help!

This year, Rx: Housing will be focusing on Ending Veteran Homeless in Louisville. Mayor Fischer signed the Mayor’s Challenge to End Veteran Homeless earlier this year and groups have been meeting to coordinate, prioritize and access resources to make it happen. Partners include Family Health Centers, the Robley Rex Veterans Affairs Medical Center (VAMC), Volunteers of America, Louisville Metro Housing Authority and you by buying this ticket today. 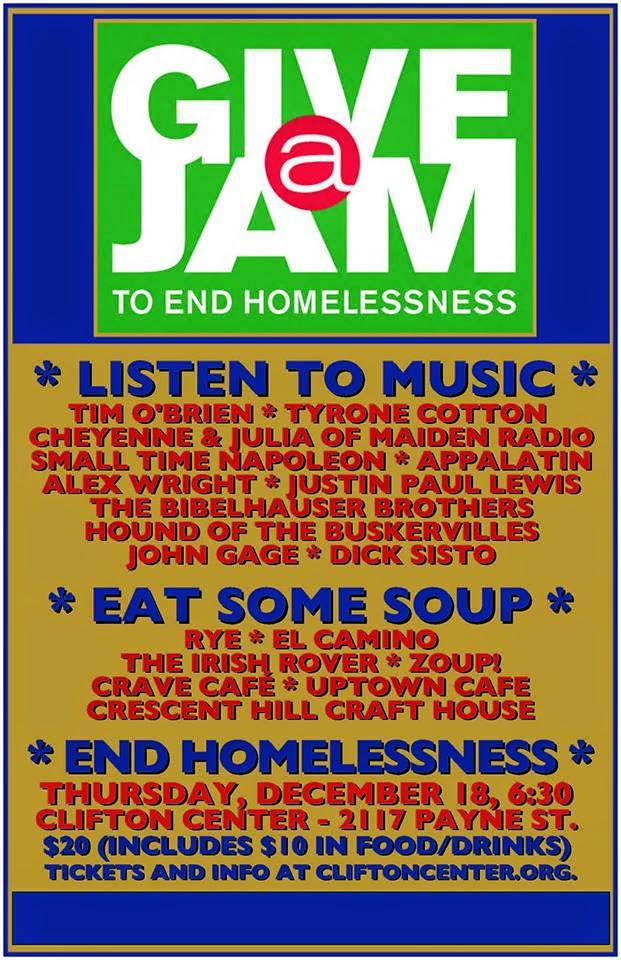 The Give-A-Jam is becoming a holiday tradition in Louisville. Once again, some of our city’s leading musicians, chefs, artists, and others will come together to raise money in support of the Coalition for the Homeless’ efforts.

We’ll have ten bands and soups and stews from some of Louisville’s leading restaurants. Tickets are only $20 ($25 with a t-shirt) and includes admission to the show and $10 in food and drink tickets.


Also this year, we have a special opportunity to be one of only 75 people to enjoy a private performance on stage of the Eifler Theatre with the legendary Grammy-winning bluegrass musician, Tim O’Brien.

The Give-A-Jam is all about celebrating the fact that everyone can do something to help. Musicians and chefs will donate their talents at the event. Sound engineers will give their time, printers will print and designers will design, all in support of our goal to help people who need it the most. So what can YOU do?

Posted by Hound of the Buskervilles at 1:14 AM